This guide identifies online and print sources for researching the legislative history of bills enacted by the Washington State Legislature.

For bills enacted before 1991, you will need to consult print resources (all available in the Reference Area section of the Gallagher Law Library), but note that all of the print session laws and many of the print House and Senate Journals are digitized and available for free online (see sections below). Steps marked with an asterisk * are optional.

Every version of the Revised Code of Washington contains the history of each section. Here is an example:

For example, RCW 46.61.165 deals with high occupancy vehicle lanes. At the end of the section you will see:

This example shows when the law was first added to the Revised Code of Washington (the last citation in the brackets above) and all subsequent amendments. For instance, this section was amended during the 2011 legislative session as Chapter 379, § 1. It was also amended in 1999, 1998, 1991 (during a special session ("sp. s."), and 1984.

The phrase "Laws of Washington" is omitted from the citations because the editors of the Revised Code of Washington mistakenly believe that these citations are self-explanatory.

These citations refer to the year and chapter number of the law. As in this example, many sections have been amended several times over the years and you may see a series of citations.

If you have access to one of the commercially produced versions of the RCW (the Annotated Revised Code of Washington, published by LexisNexis and available on LexisNexis and LexisNexis Academic [UW Restricted] OR the Washington Revised Code Annotated, published by West and available on WestlawNext), you can review the historical notes to try to determine which of the enactments dealt with the specific issue or language in which you are interested.

Many of the House and Senate Journals (dating back to 1891) are now digitized and are available through the Washington State Legislature's Legislative Information Center. The House and Senate journals are primarily procedural. They indicate which bills were read on particular dates, that a committee has considered a bill, and so on through the legislative process. For example: 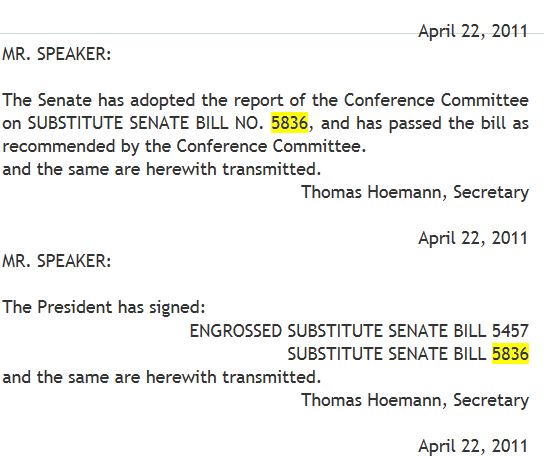 Unlike the federal Congressional Record, these journals do not contain verbatim transcripts of debates and other conversations held on the floor. The one exception to that rule is the transcription of a question-and-answer exchange called a "point of inquiry." For example: 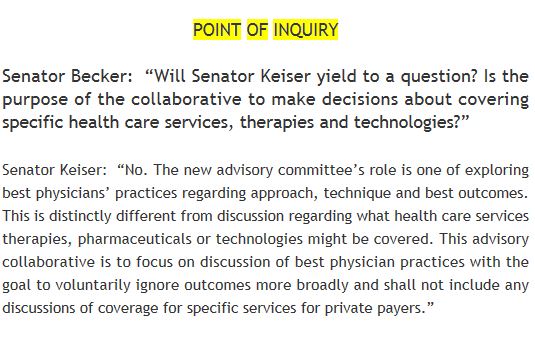 Not all points of inquiry address legislative intent, but those that do can be useful.

All of the print sources referred to above are located in the Reference Area of the Gallagher Library.

Material Found at the State Archives

The Research Section of the Archives will pull, copy, and send bill files and committee tapes on request for a reasonable fee. Archives staff cannot pull and copy sections of massive legislation: the files are not organized by topic or bill section. The Archives are open to the public, so you may research any legislative history yourself. For more information, see the Archives' Legislative History guide and/or contact the Archives staff by email: Research@secstate.wa.gov.

For bills considered before the mid-1970s, little material is available. Governor's files on specific bills are sometimes available from 1951-55 and 1965-84. Governors' files are not open until six years after he or she leaves office.

Legislative Council records from 1947-73 and personal papers of some legislators may also be useful, although the files are incomplete. See the Guide to the Papers of Washington State's Legislative Archives. CD3576.5.W37 1984 at Reference Office

Committee meeting tapes (real time, not transcribed) are also available from the mid-1970s. Tapes are not automatically sent when requesting a bill file; you must specifically request them. See also Audiorecordings.